Is This What the US Military Really Think About the Albanians?

US Military Taught Islam is Enemy, Muslims to be Nuked

The US military has been offering a course which teaches that its enemy is Islam in general, suggesting a Hiroshima-type massacre to obliterate the Islamic holy cities of Mecca and Medina in what can be seen as another instance of promoting Islamophobia in the United States. 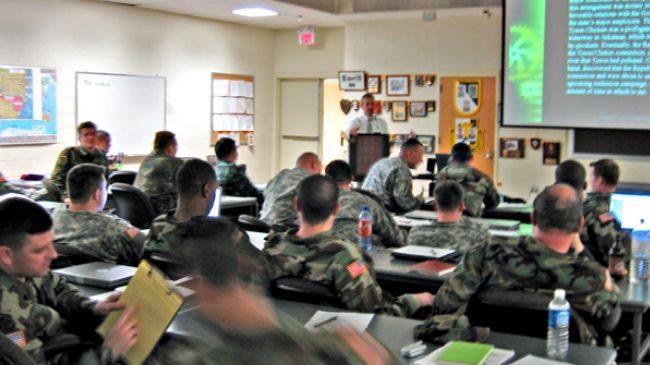 The US military has been offering a course teaching that Islam is the enemy and Muslims should be nuked.

The course, titled “Perspectives on Islam and Islamic Radicalism,” was offered five times a year since 2004, with about 20 students each time, meaning roughly 800 students have taken the course over the years before it was removed in late April after protests.

“They [Muslims] hate everything you [Americans] stand for and will never coexist with you, unless you submit,” the instructor, Lieutenant Colonel Matthew Dooley, said in a presentation last July for the course at Joint Forces Staff College in Norfolk, Virginia, the Associated Press reported.

The college, for professional military members, teaches mid-level officers and government civilians on subjects related to planning and executing war.

Dooley, who still works for the college, also presumed, for the purposes of his theoretical war plan, that the Geneva Conventions that set standards of armed conflict are “no longer relevant.”

“This would leave open the option once again of taking war to a civilian population wherever necessary (the historical precedents of Dresden, Tokyo, Hiroshima, Nagasaki being applicable…),” Dooley said.

His war plan suggests possible outcomes such as “Saudi Arabia threatened with starvation…Islam reduced to cult status,” and the Muslim holy cities of Mecca and Medina in Saudi Arabia “destroyed.”

In his July 2011 presentation on a “counter-jihad,” Dooley asserted that the rise of what he called a “military Islam/Islamist resurgence” compels the United States to consider extreme measures, “unconstrained by fears of political incorrectness.”

A copy of the presentation was obtained and posted online by Wired.com’s Danger Room blog. The college didn’t respond to requests by the Associated Press for copies of the documents, but a Pentagon spokesman authenticated the documents.

Dooley also refused to comment to the AP, saying “Can’t talk to you, sir,” and hanging up when reached by telephone at his office Thursday.

This is not the first such incident as only last year the FBI was forced to discontinue a lecture that was hostile to Islam. The instructor of the course had told agent trainees in Virginia that the more devout a Muslim is, the more likely he is to be violent.

The report comes less than two months after the US forces, in a blatantly Islamophobic act, burned the copies of the Holy Qur’an and other Islamic materials at the US-run Bagram Airbase in the province of Parwan in northeastern Afghanistan.

According to the report, these wealthy donors and foundations also provide direct funding to anti-Islam grassroots groups.