Four Serbs and two K-For soldiers have been injured in a clash in northern Kosovo during an attempt by peacekeepers to clear roadblocks.

The Nato-led force said its soldiers had fired rubber bullets and tear gas after Serbs threw stones at a roadblock near the town of Zvecan.

The soldiers were shot, reportedly hit by pistol fire from the crowd.

Serbs set up roadblocks last year after Kosovo and the EU tried to take control of the disputed border with Serbia.

The border has been the scene of recurrent violence between K-For and ethnic Serbs who make up the majority in northern Kosovo.

Earlier this week, Mr Nikolic said he would “never” recognise Kosovo as an independent state, even if it meant sacrificing the chance of EU membership.

The K-For action to remove barricades is being seen by some Serb analysts as a warning to the new Serbian president to respect EU-mediated agreements reached by his predecessor, Boris Tadic, earlier this year, the BBC’s Nick Thorpe reports. 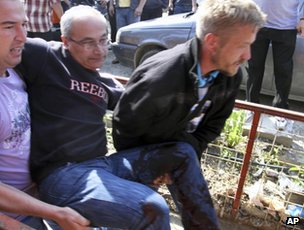 Several hundred Serbs had gathered in the village of Rudare to protect barricades, and fighting began when K-For troops in armoured personnel carriers moved in.

K-For said in a statement it had started removing roadblocks to “improve freedom of movement” for both its troops and the citizens.

The German army confirmed two of its soldiers had received non-life threatening gunshot injuries. One was reportedly hit in the ear, the other in the arm.

Two had bullet wounds, one was injured by a rubber bullet and the fourth had a head injury, he was quoted as saying, in a report which cannot be independently verified.

Oliver Ivanovic, the official dealing with Kosovo in Serbia’s outgoing government, criticised K-For, accusing it of reviving tension at a time when efforts were being made to unblock EU-mediated talks.

The situation, he warned, was “very dangerous and could escalate”.

“We have decided to tell them that the [Serb part of] Mitrovica is not open for them… that we cannot guarantee them safety,” he was quoted as saying by Reuters news agency.

Kosovo’s ethnic Albanian majority broke away from Serbia in 1999 following the war between Belgrade and Nato, and they declared independence in 2008.

At least 80 countries have recognised Kosovo as a state, but a larger number, led by Serbia and Russia, have withheld recognition.

President Nikolic has a reputation as a nationalist, and his election victory caused dismay across the Balkans among those who fear a resurgent Serbia, our correspondent says.

But some commentators suggest Serbia will remain on track to EU membership, and that its policy of tough rhetoric but pragmatic negotiations with Kosovo will continue, Nick Thorpe adds.