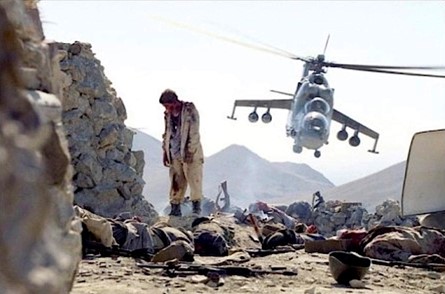 There is a chilling account in today’s Washington Post entitled, “A desperate woman’s email from Iraq reveals the high toll of Obama’s low-cost wars,” detailing the civilian casualties caused by the US government in its pursuit from high altitudes of enemy combatants on the ground in Iraq, Syria, Libya, Pakistan, Somalia, and Yemen.

President Obama, who often personally orders drone strikes, recently delivered the commencement address at the Air Force Academy in which he “rattled off to cheers from the cadets and the crowd” a list of enemies killed or captured.

Thousands of innocent civilians have been killed or injured in the past few years, punctuated by short-lived public celebrations of the assassination of opposition military figures who are quickly replaced by others ready to lead the fight against foreign attackers.

The extraordinary “collateral damage” i.e, the deaths of innocent civilians through assassination air strikes by US drone and bombing attacks, produces a new generation of people who will strike back to avenge the deaths of their loved ones. And so the endless cycle of war continues, pushed by US political leaders whose diplomatic vision is limited to peering through bomb sites at pin-point objects standing unawares on the ground.