“Albania sometimes causes irrational fear, fear of it – say that there may be five Albania. So although Albania have today have two Albania in the Balkans, and should be happy. However Albanians today have powerful status, they have become a powerful factor in the Balkans, which is not much for them. To our bad luck Albanian factor in the Balkans has been shrinking and, – continue to repeat, unfortunately, has not taken it real country should have “- © Kadare

With blood and tears tragedy was founded Albanian land. Cause irrational fear that the Albanian nation to others, allegedly in the Balkans, in fact, has been the bugbear of propaganda. But now, we fear losing our own hand Albanianism, our freedom. We are afraid of the scarecrow scarecrow shëndërrohemi propaganda-Jihad. New Ottoman emperors, sultans Erdogan-teeth grin, singing the song “You’ve Albanian gas”. Western Europe removed the nails can afford (for) violent Albanians to cure brain to those in her family’s house in Europe. However, the five-century Ottoman conquest trauma paskish sore, leave paskish Ottoman spirit complex problems.

Reins of subjugation, the Ottoman conquest had thrown so unsparingly Albanians, is allowing rein although they are removed, you can see that the violated person to go back behind (for) their abusers. Temples, brilliant history of the Albanian nation by some armed groups are brand bështyhen dumbabistash before our very eyes. Suffering, persecution and tragedy of the Albanian people in centuries, all these pains of love cure some imams give the insidious of derision in the name of Allah.

The unbearable silence that is exhibit politicians  Albanian both countries, Kosovo and Albania. Latent anti-European have received more frightening form that sometimes exists in the Albanian mentality .

Ottoman Spirit, is creating new foundations in Albania, Kosovo, the Albanians of Macedonia has long since taken place. It is no film is noteworthy open here that: religion Islam is embraced by more than half of the Albanians, that there pashas new local affiliated with a thousand fi art Erdogan sultans of Anatolia, has a layer of people underground (the dangerous) with pro-Islamic trend, no new associations “Dum Baba” (come open in the Albanian media) that are ready to overthrow the state to Turkish pro rebellion etc., etc., Alarm!

What is certain, that they are paid by Serbia and Turkey! Free Albanians have begun to believe in the values of European civilization. They do not like it if Albanians know how to live free? Yes., And Traverse resembles this disaster required today more than ever welded once and for national unity . Away from radical imams and stateless! Skanderbeg multiply statues, memorials rise and possibly go as far as the number of the number of mosques.

Who does not believe that Serbia, on the one hand pays the radicalization of Islam, on the other complains Western powers suspected them: “Look what we bombarded 1999, mosques Albanians!” 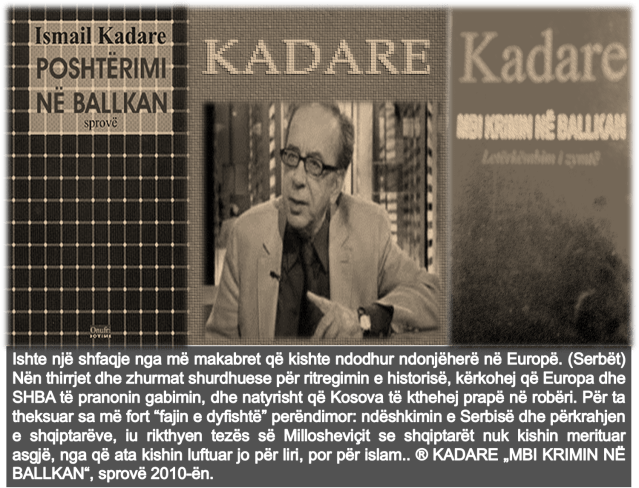 In this mosaic geopolitical world, Albanians as a nation should make the final accounts with Europe. .. Far away radical Islam isiso-terrorist! Only if Albanians are tired of their nation, then “We have to trust the vorri area gave”

Europe, the United Nations have yet sacred concept of the nation and we will keep this as ata.Së least Albanians do not we take the first flag to destroy our nation. When you disrupt the Germans, French, British … etc. their nation, then we see also in this work. So we will not become the standard-bearers of the young to break the first nation .- © Ismail Kadare.