Apr 22, 2019 kla, kosovo, serbia, war crimes
Lumnije Musaj tells the story of how her five-year-old son Rinas was killed by a grenade when Serbian forces attacked her village as they continued expelling ethnic Albanians from Kosovo during the NATO bombing of Yugoslavia 20 years ago.

On the night of March 24, 1999, Lumnije Musaj put her five-year-old son Rinas to bed for the last time at their home in the village of Mojstir, near the western Kosovo town of Istog/Istok.

The NATO air strikes on Yugoslavia had begun that evening and Musaj and her husband did not sleep all night.

The next morning, she and other ethnic Albanian residents of the village left their houses, heading for Albania and safety. But they were repeatedly halted by Serbian forces, and on April 5, they were forced to go back home to Mojstir.

During the 78-day NATO bombing campaign, Serbian leader Slobodan Milosevic initially pressed ahead defiantly with his military campaign against the Kosovo Liberation Army and continued to expel Kosovo Albanian civilians from their homes.

On April 6, the Yugoslav Army surrounded Mojstir, which before the war was an ethnically-mixed Albanian/Serb village. The troops threw grenades at houses where the remaining ethnic Albanians had gathered.

“When the first grenade exploded, my father-in-law died immediately. Then other grenades hit me and others. I saw Rinas’s stomach explode,” Musaj told BIRN at her house in Mojstir.

“I told my sister-in-law to pick the other children up and try to run away over the mountain. I decided to die alongside my son,” she said.

With the men having already fled to the mountain, soldiers besieged the wounded women and children from the village who hadn’t been able to make it.

“Rinas just screamed: ‘Oh Mum, it hurts a lot.’ I kept telling him that it would pass. I tried to take him in my arms, but the grenades had hit him badly, along with our 20-year-old neighbour Ganimete,” Musaj recalled.

She tried to walk silently with her son to get to the foot of the mountain, but she couldn’t make it.

The soldiers had tightened their cordon and kept on throwing grenades “from all directions”, she said.

She does not clearly recall how many times she lost consciousness and woke up in agony on the night between April 6 and 7, but she does remember her son crying and calling her and his father to tell them that he had lost his sight.

“After a while, he stopped,” she said.

In the morning, the soldiers took the bodies of the three people who died – Rinas, her father-in law and her neighbour – and put them in a house, then left the village under the control of police officers and four armed Serb villagers who had joined the police.

“One of our Serb neighbours, Obrad Bajnovic, came at some point in the afternoon and took me into his house. His wife and his mother tried to bandage my wounds in the leg and shoulder. They stayed awake all night, taking care of me,” Musaj said.

The next day, police entered the Bajnovics’ house, where she had taken refuge.

“Two police officers screamed at Obrad, asking why he had offered shelter to an Albanian woman. At the moment when one of them shot at me, he [Obrad Bajnovic] grabbed his gun and the bullets hit the wall of the room. The holes are still there,” she said. 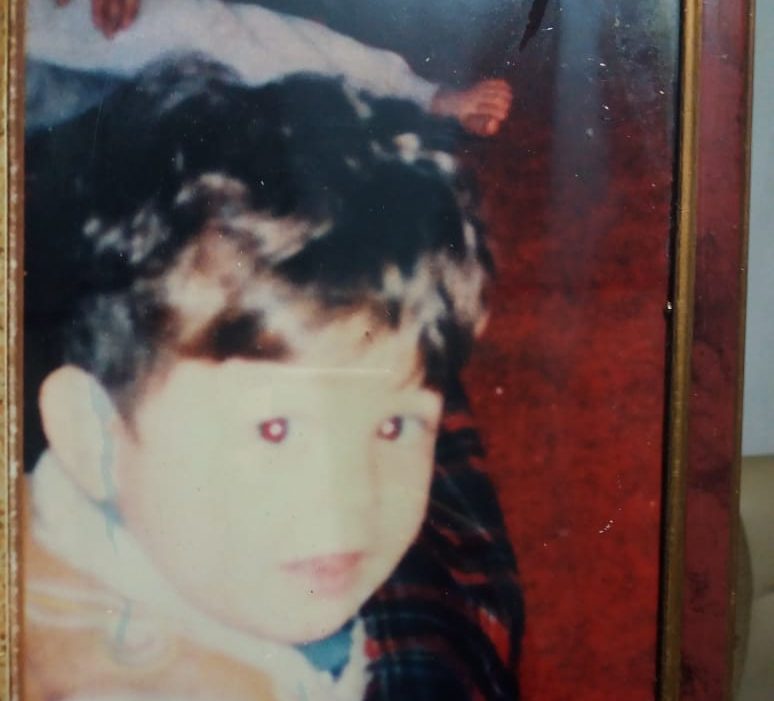 A family photograph of Rinas. Photo courtesy of Lumnije Musaj.

Musaj saw the police pick up the dead bodies of her son, her father-in law and neighbour, and she begged the Serb officers not to take them away.

“After I implored them several times, they told me that they would leave them if I could bury them within an hour,” she said.

Two decades later, Musaj, who is now 48 years old, said that it was a sunny April morning when she took the hand of her dead son for the last time.

“He was like a torn puppet, crumpled up, with the blood dried on his body and clothes,” she recalled.

She and two other women were forced to bury the three bodies in her courtyard.

“The other two women barely made a shallow pit and covered the bodies more with branches and leaves than with soil. The police stood at the scene, counting the minutes,” she said.

Musaj could not leave the village to join her husband and her other three children on the mountain for another six days until the police withdrew.

“I had buried my son and I thought my husband and three other children couldn’t survive too. I wanted the police to kill me as well,” she said.

When the police left the village, her husband and five other neighbours came to take the remaining women up into the mountains.

For the next three days, they made the difficult trek across the rugged terrain to Montenegro and safety. They were among more than a million ethnic Albanians who were displaced from their homes by the war; many ended up in refugee camps in neighbouring countries like Albania and Macedonia until the war ended in July 1999. 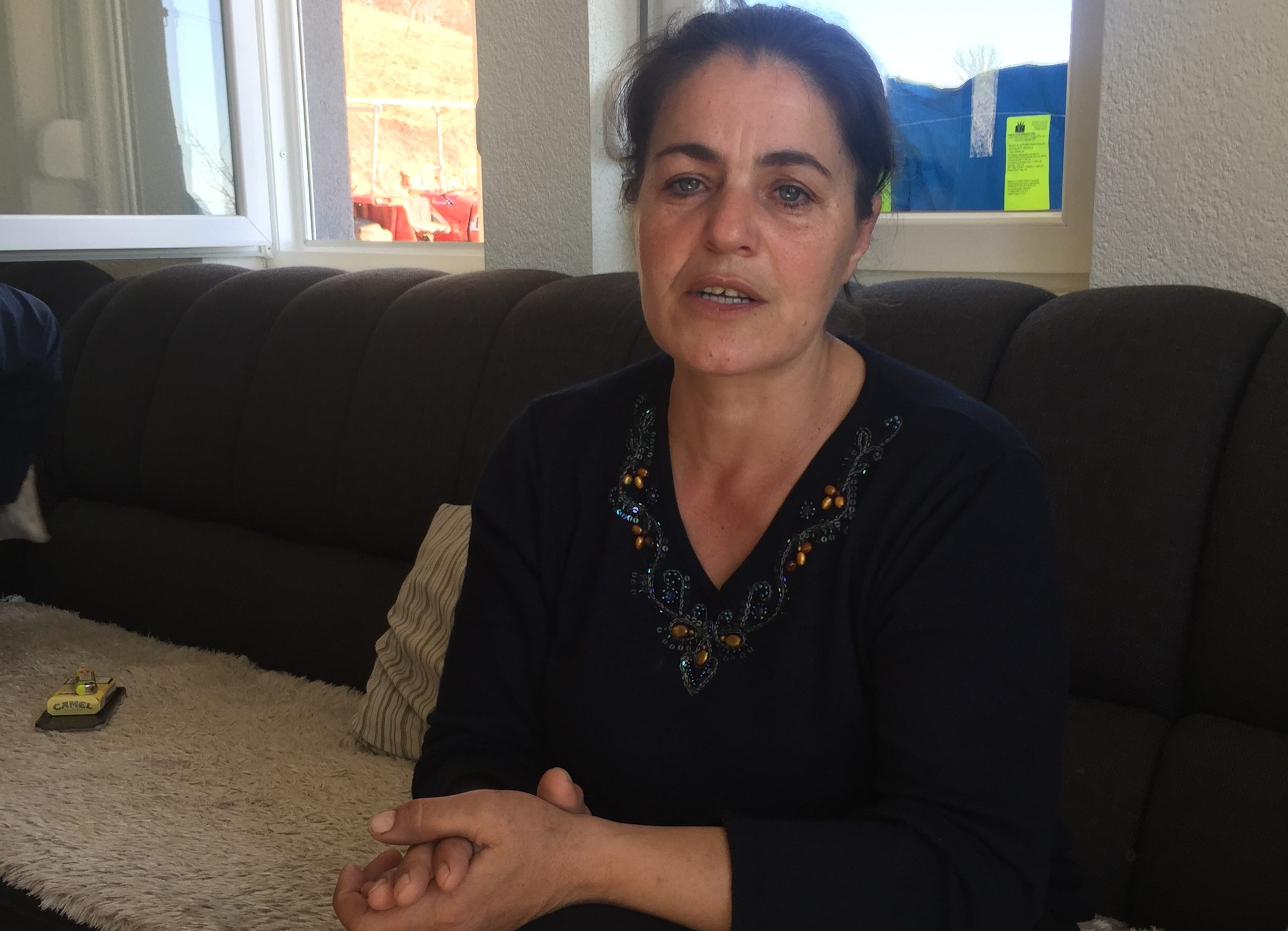 A grave in the courtyard

A hole in Musaj’s left leg attests to the four surgical interventions she underwent after the war in an attempt to avoid amputation.

When she finally returned home in July, her house was totally destroyed. The three bodies that had been laid to rest in the courtyard remained there for the next six months until they were exhumed by a team of experts from the Hague Tribunal.

“The saddest thing is to have the grave of your child in the courtyard. It looks like it’s dragging you into it every day,” she said.

NATO’s military campaign eventually forced Milosevic’s forces to withdraw from Kosovo, and the war ended in July 1999. After Belgrade lost control over Kosovo, Musaj’s Serb neighbours fled and their houses were burned and destroyed.

The Musaj family kept Rinas’s name alive by naming another child who was born two years later after him. On August 20 this year, Rinas would have been turning 25.

“Birthdays are the most difficult moments, far more painful than death anniversaries. It is very difficult when I see his peers,” Musaj said.

Twenty years on, no one has ever been convicted of the killings. Justice seems unreachable, and fury remains fresh.

“When you see your child torn apart, it is hard to find anything that will extinguish that wave of anger,” she explained.

In front of their house, her family has installed a memorial engraved with pictures of her son and father-in-law, alongside another stone tribute to the neighbour who was also killed.

Next to the engraved image of the small boy, there is one simple, poignant question: “What did little Rinas do to you to separate him from his toys?”