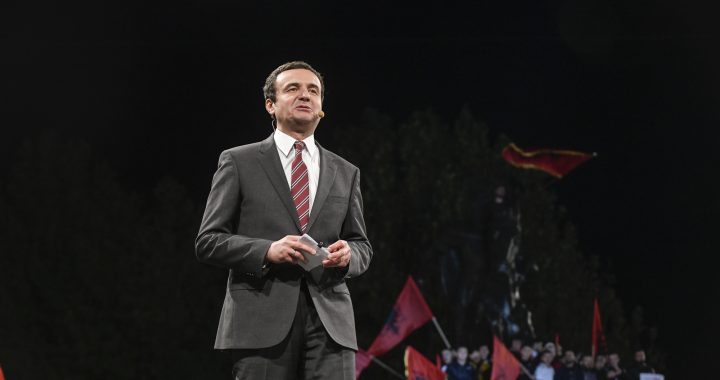 Albin Kurti on the closing night of the electoral campaign. Photo: Atdhe Mulla.

With 66 votes in favour, zero against and ten abstentions, a new coalition government led by Vetevendosje head Albin Kurti was voted in by the Kosovo Assembly at a session on Monday.

Nearly four months after parliamentary elections were held on October 6, a session of the Kosovo Assembly on Monday confirmed Albin Kurti as the country’s next prime minister, his government elected with 66 votes in favour, no votes against with 10 abstentions. 76 deputies were present after a number of opposition MPs walked out of the parliament before the vote.

In his address to the Assembly during the session, Kurti stated that today was the day that the change Kosovo voted for at the October 6 elections was institutionalized.

He promised that his government would protect the dignity of Kosovo’s workers, introduce a vetting system throughout the judiciary, clean up the environment, avoid the misuse of public funds, functionalize the health insurance system within two years and depoliticize the foreign service.

Kurti’s political involvement dates back to the late 1990s, when he co-led the 1997 student protests against Serbian oppression, and was held as a political prisoner in Serbia between 1999 and 2001. Kurti formed Vetevendosje initially as a protest movement in 2005, before the group transitioned into a political party in 2010, always remaining in opposition until the October 6 elections saw them finish in first place.

“Today is a new chapter for the Republic of Kosovo, for the life of the Kosovar people, as well as for my own political activities,” Kurti said before today’s session. “It has been 23 years that I have been in opposition, now I have finally been given the chance, and the responsibility, to serve the people of Kosovo as never before.”

As per the constitution, the remaining three ministries will be led by officials from parties representing Kosovo’s ethnic minorities. Albert Kinolli of the United Roma Party stated at the Assembly session that the ten seats reserved for Kosovo’s non-Serb communities would support the coalition government.

Goran Rakic, head of Lista Srpska, the singular party representing Kosovo Serbs in this mandate of the legislature, stated on Sundaythat the party would not be voting alongside the coalition government in the Assembly as “Prishtina institutions have failed the rights of the Serb people.” However, two representatives of Lista Srpska, Dalibor Jevtic and Ivan Milojevic took up roles as part of the cabinet.

In Kurti’s address to the Assembly, the Vetevendosje leader stated that his government is ready to sue Serbia over the genocide and war crimes committed during the Kosovo war. He also promised full reciprocity in dealings with Serbia and announced he was ready to lead the dialogue.

Monday’s session took place nearly 40 days after the Assembly was first constituted on December 26, when Glauk Konjufca was elected as Speaker of the Assembly. Konjufca passed responsibilities for chairing Monday’s session to Deputy Speaker Arberie Nagavci before being appointed as Minister of Foreign Affairs.

As a member of the government, Konjufca can no longer serve as an MP or the Speaker of the Assembly. It is expected that he will be replaced by LDK’s Vjosa Osmani in a forthcoming session.

Disagreements over the position of Speaker disrupted negotiations between Vetevendosje and LDK, and caused long delays to the formation of the government. An agreement was finally reached on Sunday, with the two parties signing a coalition agreement at the Kosovo Assembly.

The nomination of Kosovo’s next president by the Kosovo Assembly following the conclusion of President Hashim Thaci’s mandate in April 2021 also caused a rift between the parties. Kurti and LDK leader Isa Mustafa stated at a press conference on Sunday that discussions over the issue would now continue at a later stage.

The two former opposition parties have not been able to keep their campaign promise of cutting the number of ministries that make up the Kosovo Government to 12. However, with 15 ministries, the new government is still a large reduction in size from the previous coalition government, which featured 21 ministries and over 80 deputy ministers.

“Our aim to have 12 ministries was an effort to save as much as possible,” Kurti stated on Sunday. “But it has been witnessed that creating ‘superministries’ costs more than having 12 ministries. It is better to reduce quickly to 15 ministries than to wait longer for 12 ministries.”

A small protest of around 20 people was held outside the Assembly on Monday as the session was beginning, with protesters holding signs displaying previous quotes from Vetevendosje officials in which they attacked LDK and Lista Srpska.

Head of PDK Youth Donjet Bislimi addressed the media at the protest. “Vetevendosje have stepped over all their principles just to make a coalition with LDK,” he said. “Through this action we only want to communicate the truth of what has happened in Kosovo, and we will continue to do so.”

PDK leader Kadri Veseli, continued the criticism within the Assembly, accusing Kurti of being part of a terrorist organization: Syri i Popullit or ‘People’s Eye.’ “You will face responsibility for being the head of ‘Syri i Popullit’,” Veseli stated in an address to the Assembly. Sadri Ramabaja, a former Vetevendosje official was convicted in January on charges of preparing terrorist acts as part of People’s Eye. PDK officials have frequently accused Kurti and Konjufca of being involved in the group.

Addressing the Assembly at the session, Teuta Haxhiu, head of parliamentary group for the Alliance for the Future of Kosovo, AAK, labeled the new coalition “a deceit,” criticizing the changing positions of the parties within the negotiation process between LDK and Vetevendosje, particularly the appointment and potential resignation of Glauk Konjufca as Speaker.

In his address to the Assembly, Haxhi Shala, the head of the NISMA-AKR parliamentary group, accused Kurti of contradicting his own political beliefs. “In these four months we have seen you and your party being stripped of any ideals that you proclaimed,” he stated.

Before the vote, dozens of MPs addressed the Assembly in a marathon Assembly session that lasted more than six hours. The speakers were mostly from opposition parties, who focussed on LDK and Vetevendosje’s “broken promises” regarding the reduction of ministries and a change of positions on relations with Serbia, while questioning Vetevendosje’s discourse on unification with Albania, among other issues.

However, their attempts to prevent the formation of the executive failed, with the new government being elected with 66 votes. Opposition MPs from the New Kosovo Alliance, AKR, also voted in favor of the creation of the government.

The appointment of the government will also trigger another election at the local level, with mayor of Podujevo Agim Veliu taking office at the Ministry of Internal Affairs. The election for the municipality of Podujevo must be held within 40 days.

The full list of ministers that appointed to the new cabinet is as follows: