The National Audit Office of the Republic of Kosovo has found a ‘mountain’ of violations in the municipality of Podujeva.

The irregularities occurred in 2019, at the time when the municipality was led by Agim Veliu, now Minister of Internal Affairs of Kosovo.

One of the violations found was that of eliminating the economic operator with the cheapest offer. For the construction of sidewalks in some villages of Podujeva, Veliu had given the tender to the company that had offered a higher price for close to 100 thousand euros, reports Arbresh.info.

The winning company in the Kosovo Business Registration Agency has stated that Enver Zymeri is the owner. The latter’s nephew is a member of the Democratic League of Kosovo and an assembly member of this party in the Podujeva Municipal Assembly.

The report of the National Audit Office of the Republic of Kosovo also states that ‘Toifor Sh.p.k’ has won this tender in the amount of 331,177 euros, while the economic operator with the lowest price, in the amount of 255,447 was eliminated.

“Finding According to Article 7.1 of the LPP, the Contracting Authority will treat economic operators equally and non-discriminatory  and will act in a transparent manner. The Municipality for the construction of sidewalks in some villages Lot 2, had signed a contract on 19.08.2019 in the amount of 331,177 €, while it had eliminated the economic operator that had the cheapest offer in the amount of 255,447 € “, it is stated in the report. 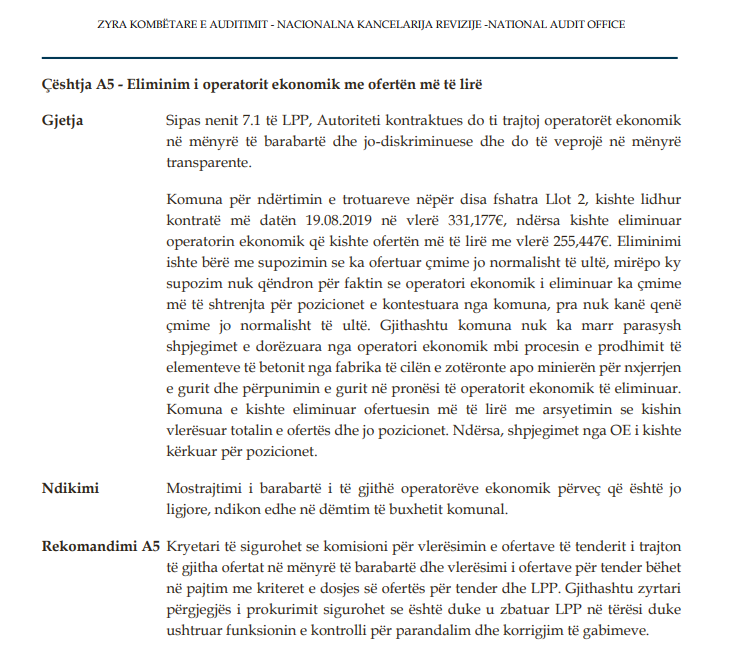 It also states that the elimination was made on the assumption that it had offered abnormally low prices.

“Elimination was done with the assumption that it offered abnormally low prices, but this assumption does not stand for the fact that the eliminated economic operator has more expensive prices for positions contested by the municipality, so they were not abnormally low prices. Also, the municipality did not take into account the explanations submitted by the economic operator on the process of production of concrete elements from the factory it owned or the mine for quarrying and processing of stone owned by the eliminated economic operator “, it is further stated.

The impact states that ‘equal treatment of all economic operators, in addition to being illegal, also affects the damage to the municipal budget.

While former mayor Veliu was recommended that all offers be treated equally.

“The chairman should ensure that the tender evaluation commission treats all bids equally and the evaluation of tender offers is done in accordance with the criteria of the tender dossier file and LPP. Also, the responsible procurement officer is assured that the LPP is being fully implemented by exercising the control function for prevention and correction of errors “, it is further stated in the report of the National Audit Office of the Republic of Kosovo.

But, this is not the only violation that has been identified in this report.

“Lack of NGO subsidy plan, lack of executive construction projects, exceeding the framework contract, weakness in contract management, irregularities with property registers, payment of advance in violation of the budget law, and others.

In the latter, the municipality is said to have paid almost twice as much in advance as it is limited.

“Finding According to article 13.5 of Law no. 06 / l -133 on budget allocations, the advance payment is limited to five percent (5%) of the contract value in December 2019. On 10.12.2019, the municipality had paid as advance payment 184,310 € for the construction of the boulevard. The municipality had exceeded the legal limit by paying 8.12% of the contract value. The excess value was € 70,818. According to municipal officials, this happened due to their confusion regarding the time of signing the contract and the time of execution of the payment “, it is stated in the report.

And this payment has affected the imbalance of cash.

“Impact Payments beyond the limits allowed by the Treasury have a direct impact on the imbalance of cash available for use by budget organizations. Such payments can lead to complications in the implementation of projects to other budget organizations due to the lack of cash, “said the audit report.

“The mayor agreed with the findings and conclusions of the audit, and pledged to address all the recommendations given. The National Audit Office evaluates the cooperation of the management and staff of the Municipality, during the audit process “, it is stated in the report.