Within 6 months, after retirement, Gani Thaçi received over 176 thousand euros from BKS (DOCUMENT)

On June 20, 2019, on a beautiful summer day, the General Assembly of the Kosovo Insurance Bureau, by a decision approves the request of the General Coordinator for Strategic Planning, Gani Thaçi for early retirement.

Through this decision, provided by KALLXO.com, Gani Thaçi, brother of former President Hashim Thaçi, the Kosovo Insurance Bureau undertakes to pay the salary of 4 thousand euros per month for the period that Gani Thaçi would have to work until regular retirement.

“Regarding the approval of the request as in point 1 of this decision, a special agreement is drafted which will be signed by the Chairman of the Assembly, Agim Elshani and the Coordinator for Strategic Planning, Gani Thaçi”, the decision states.

However, this agreement specified that the total payment amounting to 168 thousand euros, not counting the payments to the Pension Trust, not to be made monthly, but to be made in two installments in a much shorter period of 4 years. So, the payment according to the agreement provided Thaçi within six months from the decision, until January 2020, to receive 168 thousand euros from BKS and 8 thousand 400 additional euros in the name of personal contribution, which in total went to 176 thousand 400 euros. 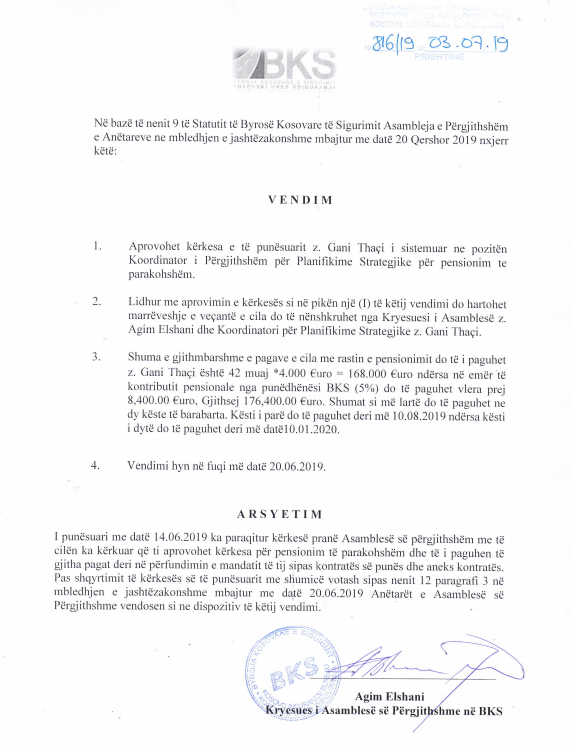 Decision of the General Assembly of the Kosovo Insurance Bureau This decision also shows the time when Gani Thaçi submitted this request to the Assembly.

“The employee on 14.06.2019 has submitted a request to the General Assembly requesting approval of the request for early retirement and payment of all salaries until the end of his term under the employment contract and annex to the contract. After reviewing the request of the employee with a majority of votes, according to article 12 paragraph 3, in the extraordinary meeting held on 20.06.2019, the members of the General Assembly are decided as in the provision of this decision “, it is stated in the document provided by KALLXO .com.

KALLXO.com has also managed to provide the 2019 Central Bank of Kosovo Examination Report to the Kosovo Insurance Bureau as its supervisory institution.

The report states that “taking such decisions without a specific legal and statutory basis by the Responsible Assembly of the Bureau,… contradicts the purpose of the Law on Insurance”.

“Moreover, such decisions reflect the reduction of the financial capacity of the Bureau and the insurers in the payment of damages. Also, such expenditures have not been foreseen in the approved budget of the Bureau for 2019, according to the consent dated 16 January 2019 ”, continues the examination report of the CBK to the KSB.

Gani Thaçi contacted by KALLXO.com has asked not to worry.

“Let them go, do not deal with them for three years. Ask the Central Bank and the Kosovo Insurance Bureau. This is a very intimate matter, you do not have the right to ask me these questions. I believe you are not right, you know your rights. “Please do not bother me, do not call me anymore because I sue you, I am telling you very honestly”, said Gani Thaçi for KALLXO.com. 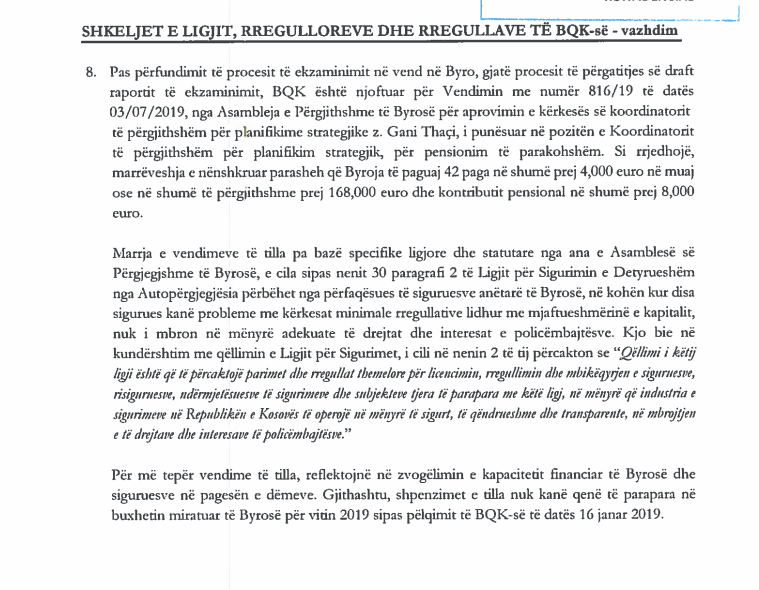 CBK Examination ReportKALLXO.com has sent questions to the Central Bank of Kosovo if they have reported this case to the competent authorities

But, the only answer of the CBK was to address the questions to the Kosovo Insurance Bureau.

Meanwhile, the director of the Kosovo Insurance Bureau, Sami Mazreku, did not want to comment on the case, arguing that the decision to pay Thaçi was not made in his time.

KALLXO.com has been waiting for a response since April 9, ie more than a month, from the Chairman of the General Assembly of the Kosovo Insurance Bureau, Agim Elshani regarding the practice of early retirement of BSK employees and on what regulations are based on the retirement of Gani Thaçi, but that he did not return there is no answer.

In 2012, he was elected director of the Kosovo Insurance Bureau to resign just a few months later, as reported ‘for personal reasons’.

Life in Kosovo newspaper, at the time when Gani Thaçi was in the position of deputy director, had reported on a contract given to a company close to Thaçi’s family, ‘ Suspicions of Monopoly, Gani Thaçi and’ Secret Contract ‘ .

In addition to his salary, Thaçi also received bonuses of up to 10 thousand euros.

In October 2018, Gani Thaçi, the brother of President Hashim Thaçi, was involved in a physical fight in the Kosovo Insurance Bureau. Following the interview, the former president’s brother was released on a regular basis.

20 thought on “Within 6 months, after retirement, Gani Thaçi received over 176 thousand euros from BKS (DOCUMENT)”