Nick Hudson of PANDA on recent events indicating that, finally, the tide behind the official Covid-19 narrative may be turning

2020 was a remarkably absurd year. It will forever be etched in our memories as one in which the most radical departure from reality as we knew it occurred. But while ‘the new normal’ imposed upon the world last year, and its stark contrast from life as we knew it, may, perhaps, mark 2020 as more distinctive in its peculiarity, the bizarre and often incongruous reality that unfolded in 2021, in many ways, surpassed that of its predecessor. PANDA, Pandemics ~ Data & Analytics, was one of the very first organisations that vocalised critical concerns in respect of the official Covid-19 narrative that, by mid-2020, had become omnipresent and entrenched in seemingly every organisation with any influence over or stake in pandemic-related policy. As the availability of data and information contradicting the official narrative increased in 2021, so did an unprecedented level of censorship of dissenting voices and, even more astoundingly, those that simply asked ‘the wrong’ questions. Promises of an expedited return to normality by the ‘simple’ acceptance of and compliance with specific directives brought about a profound and destructive divide in society. Throughout the chaos and criticism, PANDA has courageously stood its ground. Up until a few weeks ago, the official narrative seemed impervious to the myriad ruptures in its credibility. This article by PANDA co-founder Nick Hudson, however, outlines the events which unfolded shortly thereafter that, together, indicate that the tide may very well be turning. – Nadya Swart

Last week gets my vote for the most eventful one in the two years of madness that has been the Covid policy response. These are the significant events that were underreported or mischaracterised by mainstream media.

Firstly, the indefatigable Dr Tess Lawrie, founder of the British Ivermectin Recommendation Development Initiative and the World Council for Health, dropped evidence of scientific fraud linking Unitaid, funded by the Bill & Melinda Gates Foundation, and Andrew Hill—an affiliate of the University of Liverpool. The recording of Lawrie’s conversation with Hill is jaw-dropping, revealing how Hill acted at the behest of Unitaid to suppress evidence—that he himself believed in—of the effectiveness of Ivermectin against Covid.

Secondly, emails released pursuant to a Freedom of Information Act application revealed how Anthony Fauci and Francis Collins, then head of the US National Institutes of Health, conspired to smear public health experts who called for an end to lockdowns. Collins wrote about the Great Barrington Declaration that “there needs to be a quick and devastating published takedown of its premises. I don’t see anything like that online yet – is it underway?” Social media giant Eric Weinstein’s summary was apt. “Remember when I tried to tell you about how academia really works? This is it: insufferable careerist takedown artists smearing every original dissenter.”

Meanwhile, over the pre-Christmas weekend back across the pond, in a dialoguewith Spectator editor Fraser Nelson, Graham Medley, the chair of Covid modelling for the UK’s SAGE, revealed that his team only showed scenarios that suited their political overlords, which is to say, the ones that forecast disaster and justified restrictions. 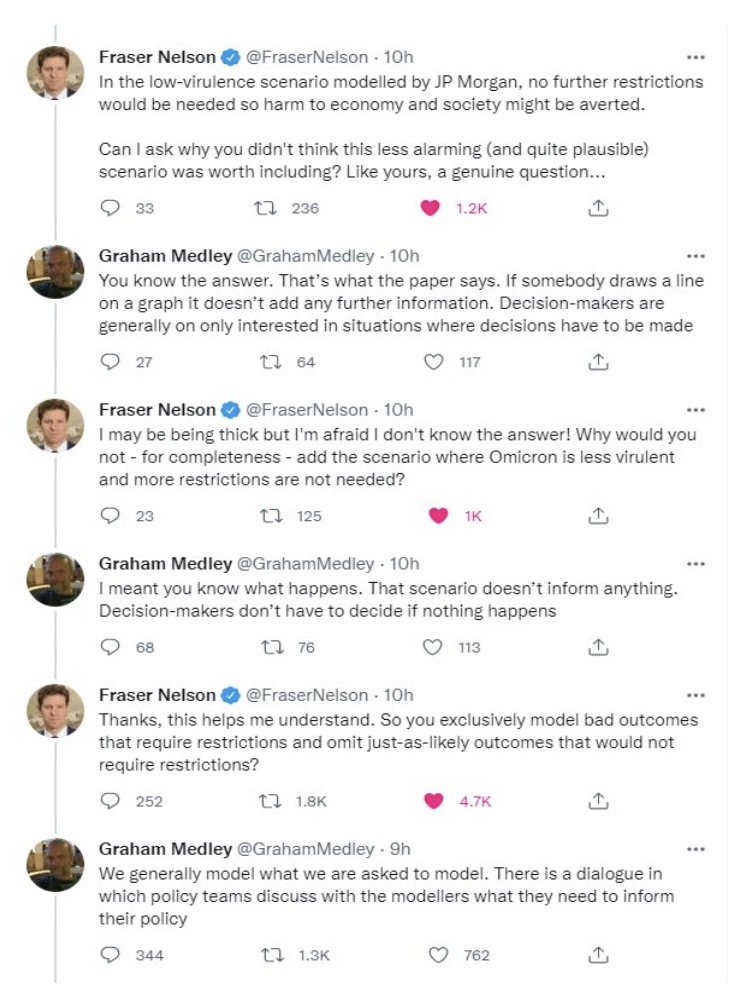 PANDA documented similar alarming circumstances around the models that were used to justify South Africa’s interminable lockdown, notably in a pair of articles published on BizNews that can be found here and here.

But while these corrupt and conflicted public health officials and academics were getting tripped up by their own lies and crimes, the voices of sane people—people free of conflicts and possessed of sufficient courage to take great personal risk in bringing truth into the light—have begun to break through the legacy media omerta and censorship by tech company oligarchs. Peter McCullough’s appearance on the Joe Rogan show, by some yardage the world’s biggest podcast, was a watershed moment.

Three books revealing the extent of malfeasance and political intervention graced best seller lists. Robert Kennedy’s “The Real Anthony Fauci: Bill Gates, Big Pharma, and the Global War on Democracy and Public Health” needs to be in your Christmas stocking. Impeccably referenced and lacerating in its criticism, it will change the way you think about the Covid saga. Dr Scott Atlas’ “Plague Upon our House” embeds the perspectives of an administration insider, detailing how following “The Science” entailed inept career bureaucrats following no science at all. Alex Berenson’s “Pandemia: How Coronavirus Hysteria Took Over Our Government, Rights, and Lives” places the emphasis somewhat differently, but the overall picture is the same. Sound public health principles have been discarded in favour of the ruinous proclamations of corrupt and conflicted officials. This has not been about public health, but about the political and personal agendas of a wealthy and powerful elite.

Revealing the extent to which social media titans are colluding with vaccine stakeholders to cover up the truth, Twitter banned Abir Ballan permanently, a PANDA executive committee member, with a Masters of Public Health, for reporting on the Lawrie-Hill conversation and its implications. As her thread on the subject had nothing to say about public health policies, this is a case of a social media company acting to cover up a major scientific fraud. 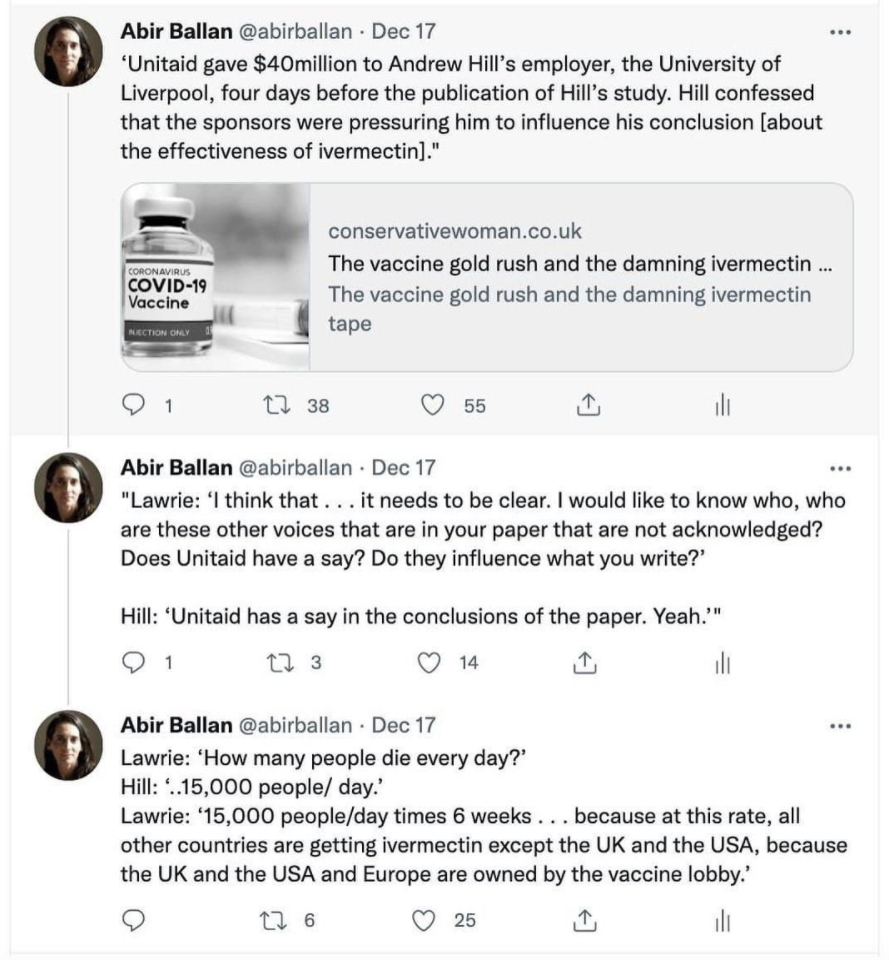 Not to be outdone, YouTube pulled down a viral interview of Sonia Elijah, a former BBC investigative journalist and researcher. The interview dealt with her article, “FDA’s forced hand drops Pfizer’s Bombshell Safety Document”, describing the revelation, also obtained via a Freedom of Information Act request, that the FDA and Pfizer had acted to conceal the full extent of Pfizer-BioNTech vaccine side effects from the public.

PANDA has consistently railed against the complex of lies that underpins the Covid policy response. In particular, we have pointed out that the “droplet and fomite” theory of Covid transmission was without substance. In an advisory letter remarkable for the profound about-face that it makes, and its failure to explain the implications of that about-face, South Africa’s Ministerial Advisory Committee—the equivalent of the UK’s SAGE—asserted what sensible scientists have understood from the start. Covid is transmitted by (minute) aerosolparticles, rather than by droplets and fomites (surface particles).

It was droplet-and-fomite theory that motivated the lion’s share of the Covid policy measures, including social distancing, the various iterations of the six-feet rule, contact tracing based on proximity, sanitising, elbow-bumping, mask mandates, perspex dividers, stickers on the floor, and most PPE. But droplet-and-fomite theory was misinformation, and dangerous misinformation at that, as it triggered a significant diversion of scarce resources away from conventional public health approaches that would have saved lives.

A tipping point has been reached and a grand unravelling is gathering momentum. As a population psychosed by fear wakes up to the reality of the fraud that has propelled the Covid response, its predictable (and predicted) futility and its immense collateral damage, we will see both witting and unwitting vassals of the propaganda abandoning ship. Depending on their degree of complicity, the publicity of their pronouncements and the extent of their conflicts, they will climb down in different ways and to different degrees at different times, creating a chaotic environment in which mutually annihilating ideas are held by the same organisations, or even the same individuals.

The South African MAC’s statement is a prime example. Were I to put up a video simply reading that statement and explaining its implications, it would be banned on YouTube within hours, even though YouTube would be violating its own community standards, by contradicting a local health authority.

Many will blame variants, saying that The ScienceTM was right in the past, but has changed to reflect the emergent beast. But this will be nonsense. Mutations may affect transmissibility or virulence on the margins, but they cannot lead to wholesale changes in modes of transmission and mechanisms of clinical action.

So 2022 will be a year of fireworks, with reason triumphing over propaganda. See you on the other side.

Politician in UK admits NO excess deaths due to Coronavirus

WHO Whistleblower: ‘We’re Living in a Pandemic of LIES – Bill Gates Is in Charge’

End of all covid restrictions ‘expected in a matter of days’

The German expert did the job, repaired Block B2

WHO Urges Countries To Relax Entry Rules For Travelers