From the project for the partition of Kosovo, to the mysterious trips to Moscow!

BY: IDRIZ MORINA
Serbia has acknowledged that its agenda for the Balkans has been overturned. The path that awaits him is the recognition of Kosovo, and not its partition!It is suspected that there was a large investment in that project from Russia and Serbia, and partly from the Albanians who supported Hashim Thaçi.

Albanians for the second time, after many years are waiting for a calmer New Year.

The key figure of the man who wanted to divide Kosovo, according to a projection-agenda declared at least in 2011 by Ivica Dacic, Hashim Thaci, is no longer at the helm of the state, nor in politics.

Some of his connections with some figures in Kosovo still remain problematic, and the figure of Edi Rama continues to remain problematic, who seems to be officially in Nis, in a secret agreement, close to the Russian base, (and maybe even inside the base). Russian – who knows, Rama may have visited him, as a discreet Russo-nostalgic) with the President of Serbia, Aleksandar Vuiqi..

This opportunity for secret meetings is supported by other sensitive information.

Also a trip not imaginary, but rumored, that Edi Rama may have traveled with a group of politicians and supporters of Russian-Serbian projects, to Russia, by a small plane.

Meetings with the Russians and Putin are no longer imaginary.

They were publicly started by the former president of Kosovo, Hashim Thaçi, and even came out with dozens of photos, to prove the authenticity of the face-to-face meetings, and next to each other in an international conference. 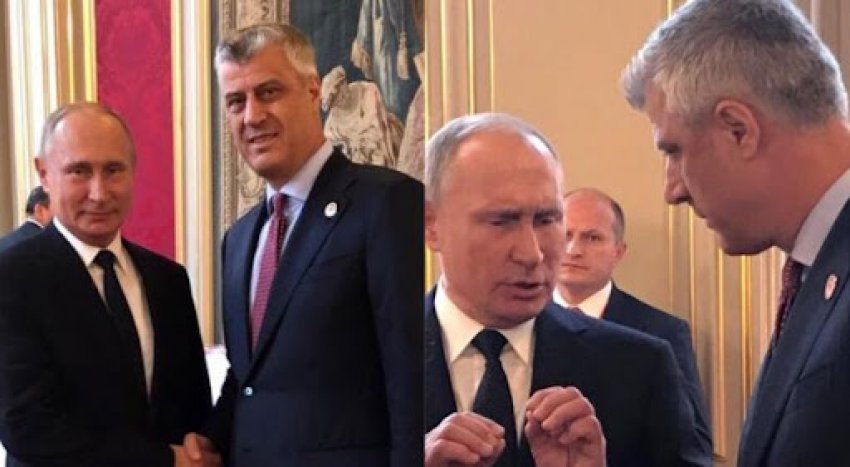 Photo from the Thaçi-Putin meeting

This project is still being tried to keep alive through the media, some politicians supporting Thaçi, and journalists like Baton Haxhiu, and some media, which are already believed to be influenced by Russian finances or money.

Even the “Open Balkans” seems to be partly motivated by this idea, of the redistribution of Kosovo, after the partition of its homogeneous Albanian territories.

Many of his supporters are also those who supported the partition of Kosovo, on behalf of Serbia.

It is suspected that there was a large investment in this project from Russia and Serbia, and partly from the Albanians who supported Hashim Thaçi.

Serbia would take the north and Kosovo would be dismantled!

There are even some who try to present it as a proper solution, and inevitable, satisfying the dissatisfied Serbia.

Finally, once again to the deceitful Albanians, who claim to have the right to accept that project, we are bringing back the information given during a debate, one of which is the leader of the Republika Srpska in Bosnia, according to whom, with Biden, the agendas ended in the Balkans, while the other participant affirms the existence of the Serbian project, with which Serbia would take the north of Kosovo.

Milorad Dodik in a televised debate on “TV Prva” with journalist Ostojic stated, as referred to by some media, that America was different from Trump, and that they openly supported Serbia’s agenda, “as evidenced by Trump’s people that “They openly supported our just and legitimate agendas,” Dodik said.

He has complained that the Biden administration is turning US foreign policy back to where it left Bill Clinton, who had bombed Serb targets in Bosnia and Serbia and Kosovo.

What Dodik says about the danger that Kosovo had to realize the Serbian agenda is completed by the journalist Ostojic, who in the debate was Dodik’s opponent, who portrays him as anti-Western, fascist, etc.

“It is true that if Trump were re-elected, Kosovo would no longer exist as a state, because the north would belong to Serbia, while the rest would join Albania.

While Dodik calls this their (Serbian) agenda, I understand it as a Serbo-Russian agenda!

The Hoti government, unfortunately, was created in order to fulfill the anti-Albanian project, Vucic-Thaci-Rama. What has been the role of Hoti himself, remains to be argued in the future!

But the US, the designer of the state of Kosovo, put an end to anti-Kosovo lobbying, supporting the arrest of Hashim Thaçi by the special court.

The fight to free Hashim Thaçi from The Hague is also a fight to return the project for the partition of Kosovo to the agenda!

A once-lost agenda can hardly be revived at the negotiating table.

Albanians have better understood politics and diplomacy, they will hardly once again agree to join the Russian alliance.

But with the advent of the Biden presidency, the fate of Kosovo, as I predicted before and after the US elections, would change forever.

The project for the partition of Kosovo would die, while the cooperating parties could be hit.

The blow will come to you, because both sides, in addition to cooperation between them, have cooperated, and some still cooperate with Russia and Putin personally!

The President of Serbia himself has already admitted that the agenda has been reversed, after the new US Ambassador announced it with a three-point US agenda in the Balkans. The new ambassador there is Christopher Hill, a friend of Albanians and personally of former President Rugova.

According to him, Hill has raised three main issues that Serbia must respect, which contains three main issues, that Serbia recognizes the independence of the Republic of Kosovo, that “Republika Srpska” remains an entity within Bosnia, and that the US- to oversee the local elections to be held in April in Serbia. Of course, Vuiqiiq, regarding the recognition of Kosovo has continued with the same rhetoric, “we never know”!

US – Biden Interfering in Kosovo Politics

“We have been left without a mayor”, Shpend Ahmeti is asked to return as mayor

The German expert did the job, repaired Block B2

WHO Urges Countries To Relax Entry Rules For Travelers